The voice of Soccer in Stratford

The Stratford Soccer Association (SSA) represents over 1,600 soccer players of all ages, genders and abilities who play in the seven individual soccer groups within the City of Stratford.

Stratford Youth Soccer (SYS) is the largest soccer club in Stratford. Approximately 1,200 youth from ages four through 19 are registered to play. SYS offers 12 House League Divisions, for all ages as well as travel teams for ages 9 and up. Over a dozen travel teams play in the SWRSL South West Region Soccer Association.

SYS has been the foundation for soccer within the City having been established over 50 years ago.

There is also a second team that plays in a Kitchener based league as well.

The Stratford Ladies Team is a competitive team competing in the ICSL.

Stratford Ladies is an Ontario Soccer Association (OSA) affiliated club in South West Region, and is part of the Stratford City FC club.

The Stratford Co-Ed League has been active for over 10 years and continues to grow each year. Teams participate twice a week locally, with each team housing roughly 20 players on each roster.

The league was started to give adults (18 yrs and older) a place to embrace their love of soccer without traveling out of the city, and to allow family and friends to enjoy some physical activity in a social atmosphere.

The season kicks off mid may and runs until the end of August. Games are played at various fields throughout the city, including SERC and St Mikes, Lower Queens Park and Battershall Park. Game times are 6:30 and 8:30 on Tuesday and Thursdays. 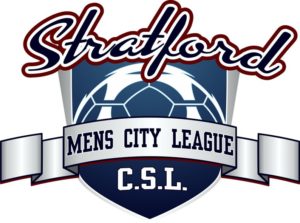 The league has been operational since the 1970’s.

On average teams play 1 to 2 times per week, from May until August. The league also has playoffs and a Cup round robin.

The Stratford Men’s Indoor Soccer League is a recreational league that has been operating since 2008.

The league plays on Friday nights at the Stratford Agricultural Complex, from October until April.

Finding an avenue to play a sport isn’t always easy.  This is why the 7 a-side co-ed soccer league was originally set-up, in 1996; to help new and veteran players come together and enjoy North America’s fastest growing sport. “That’s what we do, enjoy the sport!“,  by focusing on playing the game.  It’s a non-contact league, we don’t keep stats or scores.
“It’s all about playing the game.”
For more information, please contact;
7asidesoccer@gmail.com
or visit 7asidesoccer.ca

The Stratford Over 45 Team is a recreational team competing in a Kitchener & District Over 45 league.

This is an independent recreational league.